When our engineers downloaded Xcode 14, immediately, we noticed how much faster it was installed. Instead of downloading all of the Software Development Kits (SDKs, for short) for Apple’s platforms, Xcode 14 only ships with the iOS 16 and macOS 13 SDKs by default. Then, Xcode asks if you would like to install the tvOS and watchOS SDKs, which are less commonly used.

This new process results in a quicker install and less storage used on our developer’s machines.

The new version of Xcode builds apps up to 25 percent faster and has an app footprint that is 30% smaller. With a new multiplatform target option, Xcode can compile for iOS, iPadOS, macOS, and tvOS in SwiftUI with one toggle. Swift 5.7 also has regular expression-processing capabilities and optimized package management in Swift Package Manager.

Custom commands are now easier to run for developers. For example, with SwiftUI's new Custom Layouts feature, developers can design layouts tailored explicitly for their app and customize Swift Charts for the best visual representation of their data.

It also includes Metal 3: It helps to upscale graphics and optimizes file retrieval times. Developers can use WeatherKit to integrate data previously only available in Apple Watch apps into their applications. This is based on the Dark Sky API data that Apple acquired earlier in 2020, which is now available to developers again. 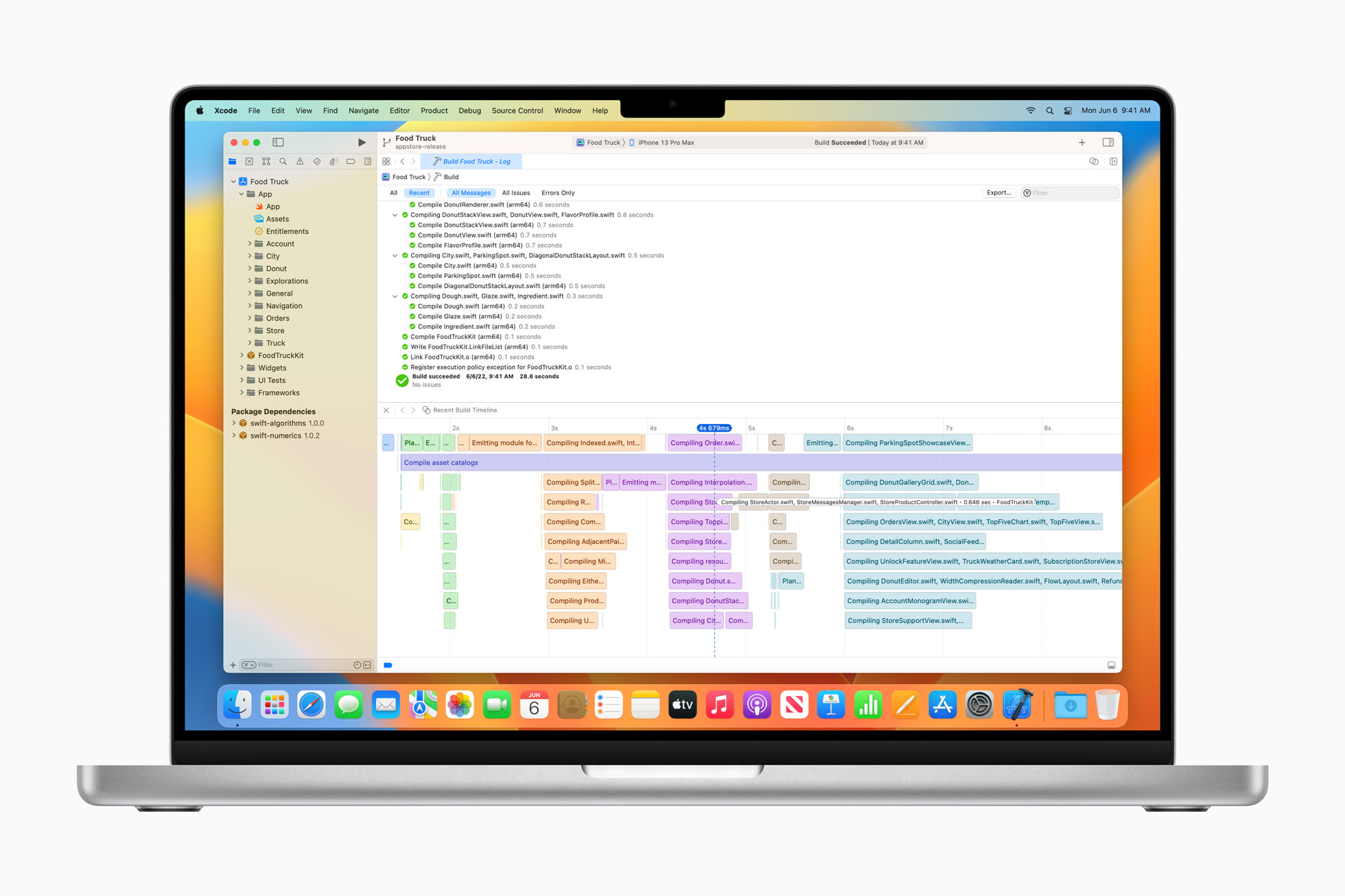 With continuous integration and delivery (CI/CD), developers can run automated tests on multiple devices to check the health of a project in the background while development continues.

Within Xcode, automated test results and user feedback are displayed in one panel. Developers can also view real-time status indicators and filter out the tasks they don't need. Integration with App Store Connect and TestFlight is also supported for faster collaboration on in-development features.

As for the Xcode IDE itself, Apple reports project builds will now be up to 25% faster, and the Xcode installation will be 30% smaller, which will lead to faster downloads and installation. The company said automatic code completion has also become more intelligent and has added dynamic code snippets to enable developers to select the code they need more quickly.

Updates and Features at a Glance

Xcode 14 opts to return to the basics and polish some core features that make the whole experience faster and smarter to use. Xcode14 brings a variety of enhancements to source editing, debugging, and viewing live user interfaces with SwiftUI. It also includes a new multi platform template to build more easily for a variety of deployment targets.

Ease of Use Improvements

During WWDC21, Apple announced the beta version of Xcode Cloud. While the service opened to additional developers throughout 2021, Xcode Cloud remained in beta. However, at this year's WWDC, Apple made Xcode available to all developers. 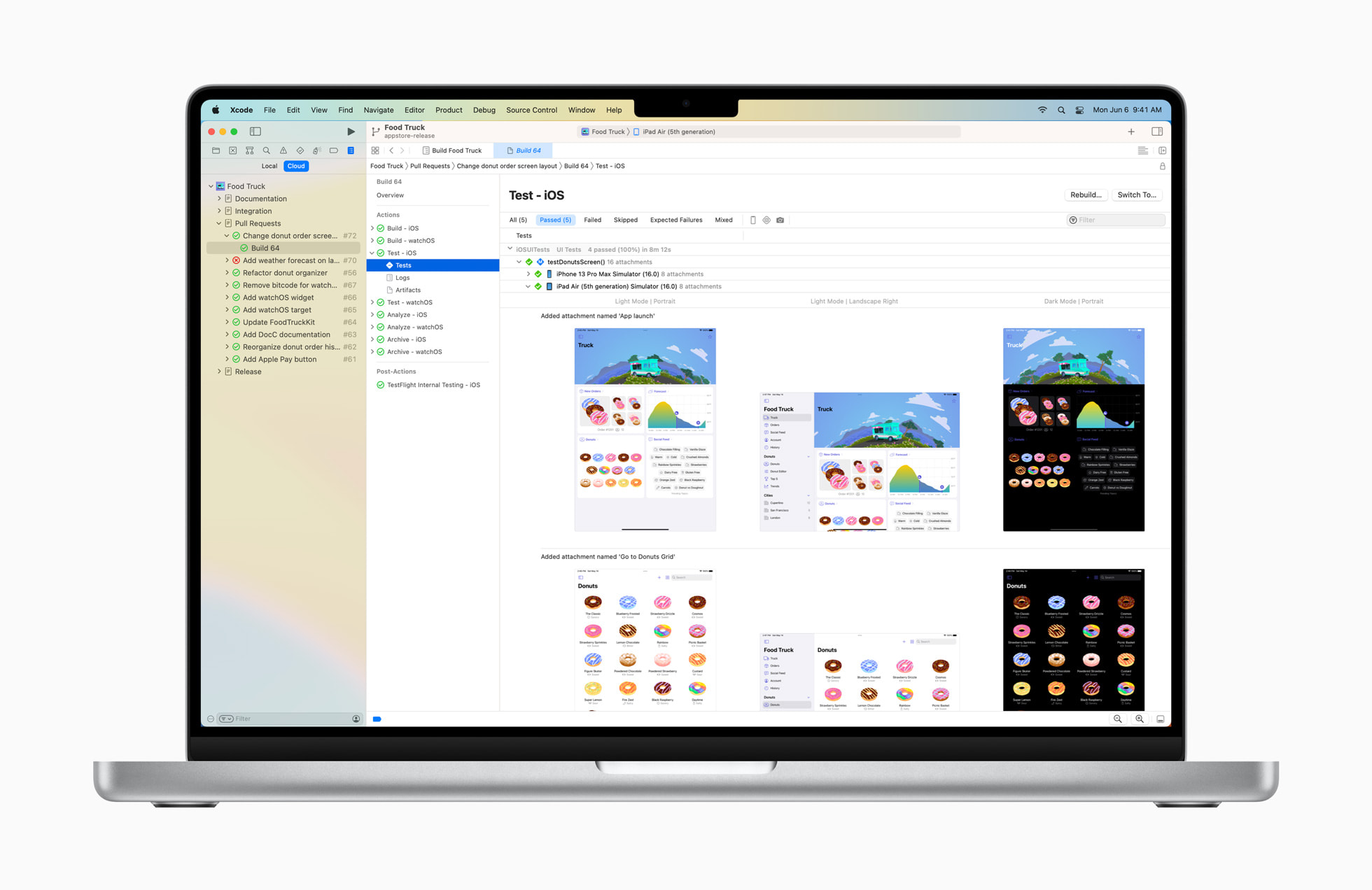 The concept behind the Git-based Xcode Cloud is to provide the Apple developer community with a tailored CI/CD solution that is deeply integrated into the rest of Apple's developer tools. Built directly into Apple's Xcode IDE, Xcode Cloud is now available to all developers and offers several subscription plans depending on the project's demands.

Until December 2023, developers will have 25 free hours of usage per month. After that, they can subscribe to one of four monthly plans, depending on the number of compute hours needed, with the ability to upgrade or downgrade the subscription at any time. For reference, a compute hour is an hour used to execute a specific task in the cloud, such as building an app or running automated tests.

For example, running five tests of 12 minutes each equals one compute hour. Since Xcode Cloud runs tests in parallel with other actions, such as analyzing, archiving, and building, developers get results quickly. Plans range from $14.99 per month for 25 hours, $44.99/month for 100 hours, or $399.99/month for 1,000 hours.

Features of Xcode Cloud for Developers

When it comes to CI/CD tools, developers have a lot of options. These tools allow developers to automate large processing parts of testing, building, and deploying code changes. Unfortunately, while services like Semaphore, Codemagic, and others offer iOS-specific features, there are not a lot of tools that specifically focus on Apple's ecosystem. The Git-based service is also friendly with standard code repositories like GitHub and GitLab. However, Xcode Cloud is specific to Apple's platforms. Features include:

Rapptr’s Xcode Experts Are Here to Build Your iOS-App

Rapptr's 100% US-based enterprise iOS developers have the experience needed to deliver mission-critical apps at the speed that organizations need. Contact us today to learn more about how we build iOS apps that people love to use.